Dear Wanna be Visitors of Croatia,

If you ever dreamed of visiting Croatia, there are some cheap flights now that you need to know about.

If you don’t have time to read this now, save it on Pinterest:  Here

Visit Croatia in two hops.  Ryan Air is having the sale of a lifetime. 15€ tickets to Croatia are possible if you travel in the early Spring, first come first served.   I would suggest a trans-Atlantic flight with any of the long-haul carriers, and I know that Ryan air has connections in Belgium, France, Germany, the UK and Sweden, so if you wanted to come to Croatia in two steps, you could (for example) spend two nights in Frankfurt and then hop over to any of the places where Ryan Air flies to here in Croatia.

At this time, Ryanair flies into four Croatian cities.

For long haul air carriers, I personally reccommend Norwegian Shuttle – I flew with them in 2016 and I was highly impressed.

The link above on Norwegian Shuttle page has the Low Price Calendar. Yes – Zagreb to LA is only $290 – but only on March 16, so when you book, choose travel dates wisely!

(I chose the option of Zagreb – Los Angeles, only because Zagreb has flights year round (others destinations in Croatia begin in summer) – check others – I am not sure about Dubrovnik, so use the link.   I highly recommend the Low Price calendar. It may shave hundreds of dollars off your air ticket.

Croatian weather is more or less a lot like California. Not everyday is hot, but we mostly have sun.

You may need a lightweight coat, if you want to drink coffee and sit outdoors, but that is about it.

Not every business is open, but things are just starting to pick up right now.

I heard that the amusement park in Biograd will open its doors opens on April 6th – Link here (in English).

It’s former name is Mirnovec, tons of photos can be found on Instagram: #mirnovec

Basically, the season  has started to awaken from its semi-hibernation as we are approaching Easter (April 1 this year), seasonal business is begining to resume and eventually click into high gear for the summer.

So, if you ever dreamed of visiting Croatia but money was an issue, or getting time off work during summer, it’s not impossible. You can probably get a discount on accommodations at this time of year as well.

The locals on VIS were ecstatic to meet (ex-James Bond) Pierce Brosnan and his lovely, full figured wife, Keeley Shay Smith, who combined the filming of MAMMA MIA II “Here we go again!” with an idyllic summer vacation. Click here for the story in English.

In those days, the closest thing I came to visiting Croatia was when I worked as a waitress at the Denny’s Restaurant in front of Disneyland in Anaheim, CA. I saw a couple, decidedly European, toasting one another with a glass of red wine. The words “comerade” did not come out of their mouths, but it was plain, as Croatia was part of the six-country conglomeration known as Yugoslavia (jug means south, so southern Slav republic) that these people were good communist employees who somehow managed to take the dream vacation of a lifetime.

Sasha and Olga (let’s call them) were exuberant and I couldn’t help but ask them “How hard is it to come to the US?” They confirmed it was a small miracle to be here. I felt somehow a bit closer to my roots, and figured if they could home here with such highly restricted travel, then so could I, with my modest student income. In my heart I decided then and there “I WILL GO!”

That day finally came, after finishing university and after working for a few years in Finance. It was in the late 1990s, after the war ended and Croatia was now an independent Republic for the first time  in over 1000 years. My Croatian cousins (we called them “the Yugoslavians” until they corrected us – whoops) came to visit the US for our cousin’s wedding.

Anyway, I realized that I had a place to stay, and it was all up to me to get my affairs in order to take time off work. I started to think about actually buying a ticket.

By the time I was ready, a year had passed.  I really wanted to go there free of any obligations because I wasn’t sure how long I would end up staying. So I worked overtime, got debt free and saved as much money as possible.

The best price I could find for air travel back then ranged from 1200-1500 USD.  Not bad – but as you can see in the link above, it’s possible to fly from LA to Zagreb for half that price $290 with Norwegian.

Another Suggestion: Check out flights from the USA (or anywhere for that matter) to Rome.

Connecting from Rome: There is the sea between us and Italy, but there at least two ways to go – 1. train from Rome to Ancona, then ferry from Ancona to Zadar (less frequent) or Split (more frequent).

Or, if you prefer the land route,2. take the train from Rome to Trieste, then a bus from Trieste to Zagreb (where there are hundreds of options).

Train then bus to Dalmatia: Train from Rome to Triest, then, here is also a break-your-hiney bus trip from Trieste to Split, I think it lasts six or seven hours, and takes you to Dalmatia in the wee hours of the morning, I took it once, and there are a few rest stops, you can stretch your legs and it was OK.

Tip: It’s good to go the opposite way too – from 9 pm-ish from Split to early morning in Trieste the next day. For more details, contact the Split Bus Station (Autobus Kolodvor): Link presented in English: Here

MONEY in CROATIA – the CROATIAN KUNA

XE Currency Converter  (there is free Ap for smartphones)

These are the main currencies we use here, but more than 90% of transactions use the kuna.

Yes we have this weird little guy on our coins, and he is called the Kuna. He is like a flying squirrel 🙂

Imagine the super soft mink fur – needless to say he is practically extinct. In medieval times, kuna pelts were exchanged for other things (for example, “I’ll give you a five hundred kuna (pelts) for your horse”). Croats have also been known to say “kunas have legs!” meaning that the money tends to run from your fingers .. OK we all know how that can be 🙂 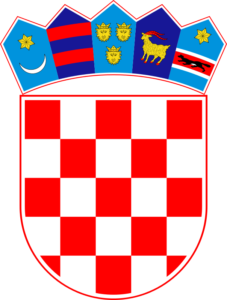 KUNAS ON OUR FLAG

If you look closely on the Croatian flag you may be able to see the kuna. He is running (of course) in the part of the crown in the far right of the “crown”. There are two white lines toward the bottom, those are the rivers of Međimure in the area between the Croatian and Hungarian border. Međimure is particularly fertile, and much of Croatia’s good food is harvested there. In the middle of the two white lines you can see the kuna.

If you’re into biking, bird watching or just like to avoid the crowds, now is a great time to come. You can  also save money on accommodations since it is still the offseason.

Spring time can be particularly interesting around Easter. There are processions on Palm Sunday, which is exactly one week before Easter, the blessing of the bread by the Parish priest, and more. Easter itself is a major Catholic / Croatian cultural holiday.

Even if you don’t come to Croatia right now, you can do the next best thing and make some delicious Easter Bread!

The Easter bread, known as SIRNICA is delicious and easy to make. Here is a link to a recipe that I use every Spring. I eat it fresh, and freeze the rest. You can warm it up in the oven when guests come. It also makes a wonderful, citrusy and rum/vanilla flavored toast – excellent with a good cup of coffee!

Here is the Link – it’s a family favorite: Sirnica

This, along with other genuine Dalmatian recipes that I use myself, have been compiled into a mini cookbook, which I am providing as a gift to new subscribers to my blog. So if you haven’t done so already, add your email, confirm, and I will send you the free downloadable recipe book.

IF YOU CAN’T TRAVEL NOW:

Another good time to visit is in September, but the prices are usually higher than they are right now.

Iwant to hear from you..yes, you… and – SOCIAL MEDIA

==>  What would you like to hear more about? Tell me in the comments below.

Don’t be shy! grab the recipe book! It won’t be around forever!