For the 2018 World cup Croatia somehow made it to the FINALS!!!

It’s been a long time coming…

If you’re busy cheering on Croatia now, you can save it to Pinterest here.

Dreams Can (and do) Come True:

Tiny Croatia with its 4 plus million inhabitants – by some twist of fate and a lot of hard work – has reached the finals – yes – the WORLD FIFA championship!

VATRENI!
(full of fire!) That’s what Croatian football fans are!

WHAT IS FIFA
For those who aren’t sports fans, FIFA is an annual soccer competition each summer, with teams assembled by country. Each participating team sends a representation of its home soccer players to compete on the world stage.

No less than four members of the Croatian soccer team are from ZADAR! I don’t know what that means – that our climate breeds great athletes, or that the water has lots of enzymes in it… I only know that we are kicking ass this season!

In 1998 when Croatia was a brand new country, we won the Bronze medal.
Now, once again, Croatia will stand on the pedestal with no less than a Silver medal if it loses to France.

My own FAMILY TIES

My mom is French (descended from Orange, in the Provence region) and my dad is Croatian (from Dalmatia, specifically Vis Island where Mama Mia II was filmed last year)! Yes, I truly love the French, but in this case, for the 2018 World cup, Croatia has my full support.

Ever since the victory against England, men, women, and children of all ages are swarming to the store to buy and get dressed in team clothing. 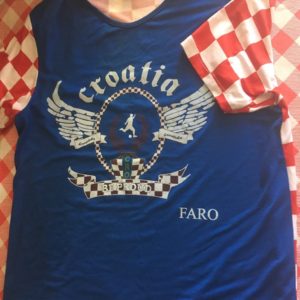 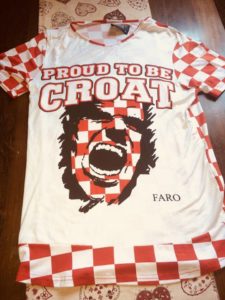 The boys and men usually wear T-shirts and the women too, or else long tank top dresses in Red, white, and sometimes blue.

We call this team clothing simply “dress” which could be translated to mean “outfit”.

The favorite emblem of all is the red and white checks, from the Croatian coat of arms. This coat of arms goes back to perhaps as far as the 8th century AD when Croats were self-ruled. The era of Kings began during this golden age, and King Tomislav was crowned in Biograd.  King Peter Kresimir was crowned in Sibenik in 1064, and many of these ancient landmarks (such as Klis, just outside of Split) are often used to film episodes for Game of Thrones.

THE COAT OF ARMS OR GRB

Here is the design, which Croatians refer to as their Grb (gerb). The triangle pieces or crown above the grb represents different regions within Croatia, namely, from left to right…

Psst… THE GRB is Everywhere –
It’s used on official documents and on government buildings for the Republic of Croatia.

Never mind that the game went into overtime more than once, and everyone was exhausted.

Fouls and other nasty business. A good example of this is when Mario Mandžukić was “accidentally” slammed by British goal man Pickford “He f.-ing fell on me” but the replay tells a different story.

More importantly, instead of just getting mad, yelling at the judge and getting a red flag, although he was in extraordinary pain, Mandžukić kept himself together just long enough to score the decisive goal against the UK just a few minutes later.

In my humble opinion, the top names to look out for are:

A little bit about LUKA MODRIĆ

The most famous is Luka Modrić. As a child, he and his family were refugees during the Homeland war in 1991. Therefore, he knows what it’s like to fight for what you want. After their family home was burnt to the ground, Luka, who was six at the time, ran for his life with his family where he grew up and became an expert soccer player.

Here is his story:  Luka Modrić

What some experts conclude the 2018 World cup Croatia vs. France will look like, click on the link below and see for yourself if you agree with them. Besides that, the French are strong (at least for defense) but the Croats are a bit hungrier.

The average age of Croatian citizens is 41 years old.

The average birthrate is 1.5 children per mother, among the lowest in all of Europe.

Croatia has – for centuries – been the underdog.
But like all Croatians today – we are all holding our heads up high.

Do viđenja! (See you later!)