Today I am writing about Krka National Park in Croatia, one of Croatia’s eight (8) national parks. It may be relatively smaller than some of the others, but it definitely packs a punch.

Hey 🙂 It is always a pleasure to be able to write to you again. If the boss is looking over your shoulder and you want to save this post for later, just click on the blue text to your right – just save it to Pinterest here.

Last week I had the opportunity of leading a tour of tour guides (yes, such a thing exists) at Krk National Park. I love the park, and each season is special for different reasons. If you haven’t yet been to Krka (as it’s called in Croatian) you are in for a big treat.

It is the high season right now, which means not only peak number of visitors (from everywhere imaginable) but also high temperatures and high humidity. All of Europe and many other parts of the world have come to pay Croatia a visit. 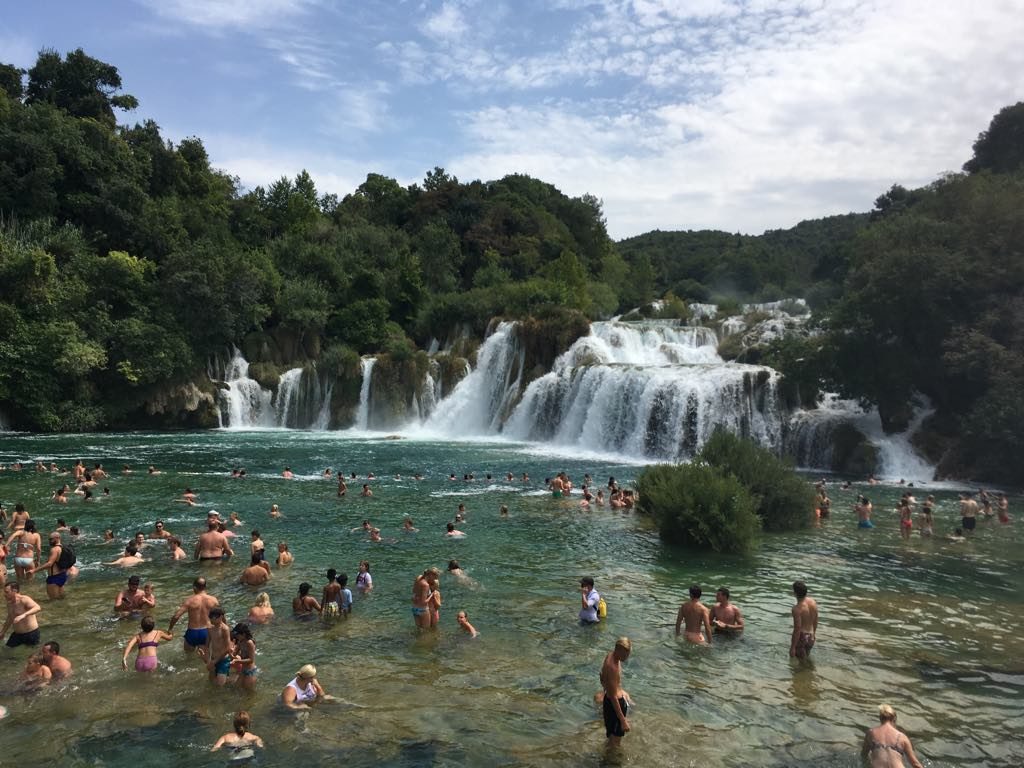 But here at Krka in Croatia, the feeling is simply: AAAHHHHH…

10 Reasons to visit Krk in the Summer

What you get with admission

A very nice guidebook filled with a map and stories about the Park. It is good to read later – very nicely written – concrete and informative, and is printed in several languages.

Nyuk, nyuk, nyuk….Since Niagara Falls on the US/Canadian border and Krka National Park in Croatia are kind of “soul sisters”, I am including a bonus clip of the Three Stooges doing their famous Niagara Falls routine click on the words Niagara Falls or HERE. Those two words sure do seem to get a rise out of them 🙂

As a tour guide, I really love and appreciate the wonderful architecture to be seen in (for example) Sibenik, Split, Zadar; Ston, Trogir, Cavtat, Knin, Salona, Solin, Rijeka, and Pula. To be honest, each is like a mini Game of Thrones. But in the summer heat, Krk is truly paradise on earth.

At Krka National Park in Croatia, Guests are not only allowed – they are encouraged to bring their bathing suits. No need to be shy! – dive into the swirling blue water under the cascading waterfalls! Sunbathing on the grass is also allowed. Basically, make yourself at home. I think the Croatian nation is among the most hospitable, and I have traveled a lot.

Some Major Attractions Within the National Park itself:

Nikola Tesla’s alternating current technology was the genius behind its success. Ironically, he was busy helping out Thomas Edison on the other side of the world at the very same time.

(Can you say it? It’s Veees-KOH-vats.) If you want to really explore the park – it is quite huge, actually. The part that most people visit are those areas which are the most accessible, i.e. Ethno huts, boardwalk and Skradinski Buk with grassy area and eating area.  But – if you have a full day and feel adventurous – consider paying a little more and taking a boat tour to the far regions, where the V-word is actually a tiny island and home to a 14th-century seminary and 15th-century seminary of both Roman Catholic and East Orthodox faiths!

The seven waterfalls (“buk” with a long “u” sound) of the Krk river have, over the course of millions of years, carved into the underlying limestone to create such a wonderful effect. They are: Bilušića buk, Brljan, Manojlovac slap, Rošnjak, Miljacka slap, Roški slap and Skradinski buk. The last two are best known and the most visited.

The river power also was responsible for local trade and industry. Tiny huts near the entrance show how the river power created weaving, mill grinding and even lumber production hundreds of years ago. This is what we call Ethno tourism.

You can find similar examples of this in other parts of Croatia, for example at Pantana Mill near Trogir, in Karlovac, and in  Benkovac (taking advantage of the natural river power to get things done).

At the beginning of the last century, Archduke Ferdinand visited the park. In honor of his visit you too can pretend to be him, by peeking out of a special hole in his figure.

We have also heard that Bill and Melinda Gates rent a yacht here every year and hide out on the waterways for a month with their family. Kevin Spacey has also been rumored to be lurking around. 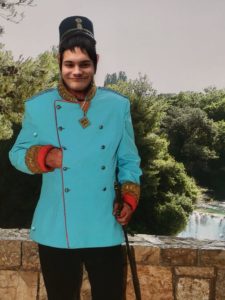 Local Specialities to Eat or Bring Home as Souvenirs

As a special bonus, when you prepare to leave the park, you will find tables of homemade specialties – sugared almonds, orange rinds and special salty crackers, dried figs and more. The ladies selling them know what they are doing, and there is a good chance they are following their own grandmother’s treasured recipes.

Two bathrooms are located in the park – one, at the top, near the Ethno huts, which is free of charge, and another, at the base of the waterfall area. This one costs a few kunas, one more reason to change money before entering the park. It is located a bit further, past the food area, towards the commuter boats which connect you to Skradin, a former Roman, Greek, Iliric, Venetian capital.

In ancient times, this area, a convergence of seven tributary rivers, was a type of border between the Dalmatian and the Liburnian tribes. Croatia was inhabited by indigenous Illiric tribes prior to the Greeks, something like the American Indians. Each tribe had its specialties; the Delmati were shepherds, and the Liburnians were sailors (and sometimes pirates!).

Skradin is a miraculous little jewel of a harbor, nestled in between protective mountains. You can reach it from the A1 highway if you want to visit without entering the National Park. The Romans called it Skradona.

Why should I come to the park in the summer?

The sights, the sounds, the smells.. and the feeling of being at one with nature. Yes, there are a lot of people visiting then, but the overall vibration is very harmonious, and you will have lots of opportunities to take a selfie in front of the most gorgeous of waterfalls.

Besides, if you are anything like me, it’s kind of nice to get away from stone, steel, and concrete during the hottest of summer days.

What about Plitvica? I thought it was better

Yes, of all eight national parks, Plitvica is the Queen Mother of them. However,  being quite large, you will need at least a full day to investigate. In the summertime, I for one, feel like doing less, and maybe you feel the same. It is gorgeous for sure. Instead, I would recommend visiting Plitvica in late Spring or early Fall – or – if you really love snowscapes, check out winter Plitvica but invest in good warm waterproof boots for comfortable hiking.

Kids will definitely enjoy, and will probably impress them. Many children are not used to being so close to nature. Here, they can spot fish swimming in the river water below their feet, and may even see a frog or two. If your child is in a stroller, maybe you should wait another year. The boardwalks are fine for strollers but all those steps can be troublesome for strollers unless you are in the mood to fold it up and carry it with you. There are plenty of steps to the bottom with handrails and it is very easy to navigate.

It is a comfortable walk, with arm rails and logs to sit on if you get tired or just want to soak up some of nature’s incredible beauty.

So, being an experienced tour guide, as well as a travel and lifestyle blogger, I would strongly suggest visiting the cities during the late Spring and early Autumn, and when it is very hot (30 degrees Celsius is normal) particularly between mid-July and mid-August, try to lay low and be close to water.

The psychological impact of being near water.

Scientists and sociologists have proven that water has a very healing effect on the psyche. In fact, even putting a picture of a seascape in your living room can enhance the quality of your life.

If you have already come this far – Croatia has many options. For example, you can choose the sea, or Lake Vrana, or a refreshing national park filled with waterways. They are all lovely, but when it comes to a convenient location that really lets its visitors feel at home with nature, I give two thumbs up to Krka National Park in Croatia. 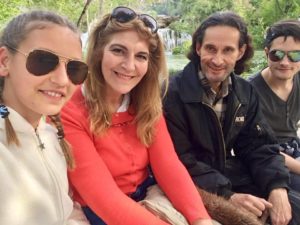 I hope you make it here – and if you do, tell me what you think of Krka.

If you’d like to follow me, I  send out details on airfare deals, articles about productivity and side-hustling, as well as fun-photos from my life here in Croatia. I am the most active on Instagram.

If you subscribe to get the newsletter now, you’ll be on my list to receive special goodies, starting with my personal recipe book. People have asked for more so I will be taking it down soon and revamping it into a formal downloadable product so best to get it now while it’s still a freebie.

Have a Great and Happy Summer!
Till next time 🙂