The coffee culture in Croatia is really quite remarkable. If you want to save this later to read, you can save it to Pinterest here.

I always loved coffee, but since relocating abroad, I may be entering the realm of a coffee aficionado, I love it so much. Drinking coffee means socializing and people watching – seeing and being seen!

It’s no secret that coffee helps us move and function – but here in Europe, specifically Croatia, it has a culture all its own. Foreign guests may only begin to get a glimpse of this coffee culture after a few days visit here.

One cup of coffee can stretch out for quite awhile – at least 45 minutes, because Croatians really nurse their coffee – and they don’t gulp their coffee (like Americans do!!) – they sip.  It would be unthinkable to multi-task coffee with driving or any other activity.

Besides that, coffee dates can be totally spontaneous! I will explain more, below.

When people go outside, they try to look presentable if not snazzy, that means makeup, cologne, and clever accessories. No baggy-butt sweatpants when you get out of the house because you never know who you will run into.

Maybe even a new friend 🙂

Did you know that if you run into a person for the third time you are destined to sit down to coffee with them? The belief is that destiny is bringing us together to discuss some matter of vital importance.

COFFEE is both Cheap and Expensive

If you make it at home, it’s a lot less, but people usually have pocket money for coffee as a social necessity.

My newest toy is pictured to the right, a Mitaci i4 coffee machine, which uses Illy coffee capsules. I bought a good, used professional coffee maker on Njuškalo, our online marketplace. By the way, making coffee at home using capsules is at least 50% cheaper than that made in the coffee shops (the Kafić (kaa-FEECH).

What to order? Here are some popular choices – so feel free to test your coffee knowledge:

TOP COFFEE DRINKS AROUND THE WORLD

Black coffee/Cup of Joe – American Coffee
Black coffee is good for a morning shock or afternoon jolt. It may also represent a rite of passage from childhood to the sometimes bitter realities of adult responsibility.

Espresso  – Some Like It Strong
The best way to make espresso is to use an espresso machine or an Italian coffee maker. In Croatia, a short black coffee is also referred to as “Turkish coffee” probably because coffee first came to us through the Turkish invaders. 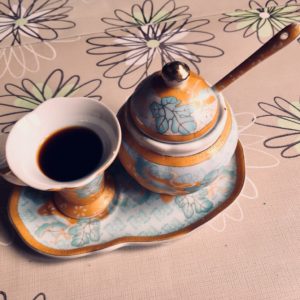 Did you know that it is a big no-no to drink a cup of coffee with milk after lunch? Italians cringe when they hear foreigners ask for a cappuccino, or any coffee drinks made with milk like the macchiato. After lunch, only a short black cup of espresso is considered acceptable. Nothing else makes sense to them on a full stomach of food.

HOW IT ALL BEGAN – A History of Coffee and its Development

Coffee has been in fashion for at least 500 years! First discovered in Ethiopia, it made its way to Turkey and the East, then to Europe.

By the 1700s coffee was making its debut in the New World, first in the Caribbean then to Brazil by way of Africa.

There is a legend how one man’s determination to plant coffee beans in Brazil met with resistance from the governor until finally, the governor’s wife gave him some coffee plants disguised as a bouquet. From these few humble plants, plantations of coffee thrived, making Brazil to this day, a top global producer.

This is stronger than macchiato, and goes down easy. A good drink for mid-morning, in my humble opinion.

Brushed Suede is a caffè crema (long espresso) with steamed milk, finished off with a dusting of cinnamon. I personally find the ones at McDonald’s in Zadar to be sheer perfection.

Flat White – same thing, different name (like Maggie, Peg, Ok you got it….)

The morning coffee ritual is an international one, thanks to the widespread acceptance of the coffee bean as a light, but effective drug.

Caffeine enables students, workers, housewives, and executives the pickup and go they need to get started in the morning, usually after not enough sleep or a stressful work week.

Coffee quickens the pulse, getting the body in a mode to face a new day. If one cup is not enough, by all means, have another! (and another.. lol..)

EUROPEAN COFFEE CULTURE
A big coffee drinking culture evolved from the economic reality that a meal out was simply out of reach. Instead of “let’s do lunch” it became “let’s go have coffee”.

Coffee shop ambiance is very important. Thatis why the coffee on the town square or facing a lovely scenic view will invariably be more expensive since it adds to the experience.

For example, coffee in downtown Zagreb on Trg Ban Jelacic or on the Seaside Riva will be more expensive than the coffee in a musty coffee shop. That’s just the way it goes.

POPULAR COFFEE TOPPINGS
What to sprinkle on top of the foamed milk? Here are some favorites:

(PS, Nutmeg is a drug you know)

When you think about the sweet middle eastern pastries like baklava, drinks like Turkish coffee really pair up well with them.

Turkish Coffee:  “Dark as hell and sweet as love”

Turkish coffee is brewed up in a tiny, metal pot on the stove. It doesn’t require a filter.

Also known as “cowboy coffee” it is brewed up quickly and simply and will wake you up in a jiffy.

In Australia, they make it the same way, out in the Outback, in a tiny pot over the fire. Let’s face it, it’s a classic!

How to Make Turkish Coffee
Brewed in a pot with boiling hot water and plenty of sugar. Once the coffee grounds fall to the bottom, the contents are carefully poured into tiny cups.
The bubbly coffee foam (the “best part”) is individually spooned out to each guest.

(as Linda Richman says in a thick New York accent on Saturday Night Live)…
Most Americans use a coffee maker like Mr. Coffee. It uses cold water, and with the help of electricity, boils the water and brews it through a coffee filter which sits in the upper compartment.

The result is a great brew, but you will (definitely) need more than one cup.

I know Americans who water their plants with it (let’s just say, my mother’s plants were always perky!)

There is a Croatian expression – “Manje ali slađe” – literally, it means “less but sweeter”, but in reality, it means, better a little of something great

…than a whole lot of something mediocre. Kind of like Sponge Bob’s hamburgers.

Portland, OR (they have outrageous donuts there too)
Seattle, WA
Paris, France

“You’re so vain” by Carly Simon (link below)

You’re so vain
You probably think this song is about you
You’re so vain,
I’ll bet you think this song is about you
Don’t you?
Don’t you?
Oh, you had me several years ago
When I was still naive
Well, you said that we made such a pretty pair
And that you would never leave
But you gave away the things you loved
And one of them was me
I had some dreams, they were clouds in my coffee
Clouds in my coffee, and

You’re So Vain, by Carly Simon

Coffee in Bed by Squeeze

Maybe you know of others? These are all I know 😀

Milk or No Milk (Latte)

If you need a little cushion first thing in the morning, there are levels of milk cushioning. The macchiato contains the least amount of milk – just a dab to mark the espresso. It’s great for an afternoon wake-up call, too, especially if you find yourself dozing off at your desk after lunchtime!

The cafe au lait is half warmed milk and half brewed coffee, which is still kind of a lightweight coffee drink. It’s a good choice for an exec that has to meet with clients all day with the obligatory cup of coffee. You won’t get wired on this baby, and because it’s larger, it can be leisurely enjoyed and savored.

Even more milk? Well, the cappuccino uses 2/3 milk BUT the drink is made with dark and strong espresso beans. So technically, it’s practically a tie with the Cafe Au Lait.

The Cappuccino especially lends itself to an optional spice or chocolate topping, adding to the flavor combinations.

2. Coffee with milk – steamed
Brew ground coffee in a similar machine. In a separate pot using a long nozzle, bob the pot up and down to create foam and serve.
Acceptable to drink any time of day, only not immediately after a meal. (Milk after meals is not recommended.)

3. Coffee with milk – cold
Same as the above, simply add cold milk from the carton and gently stir.
This is a good choice in the summer when it is hot, and milk may go bad when reheated more than once in a commercial coffee shop.

4. White Coffee / Cafe Au Lait
Consisting of Brewed coffee with heated milk, at a 50-50% ratio.
Commercial whiteners may be substituted.

5. Macchiato (mak-kee-yah-to)
Consisting of a shot of brewed espresso, it’s “marked” with a teaspoonful of milk foam.
Macchiato means “marked” in Italian.

6. Cappuccino
Prepared in three layers, first is brewed espresso, then latte (warm milk) and finally, milk foam.
The top of the foam can be dusted with cinnamon, chocolate powder, etc.

Many lactose sensitive or intolerant coffee lovers have turned to the surprisingly tasty substitute of soy milk. Some types of soy milk are even flavored – vanilla, chocolate, and low-fat varieties, so have a ball. In Europe, soy milk is usually a bit higher (latest – 2€) but in the US the prices are much more reasonable. Best of all, it foams up like a dream!.

(Health Note: It is said that Soy Milk is great for women going through the change of life,  i.e. menopause.)

The South American and Mexican cultures are long familiar with rice milk. I have never used it but it could probably be a delicious milk substitute to dilute your cup of Joe with.

My mother used to use Mocha Mix – that is the only other one that comes to mind (except for dry powders like Coffee Mate).

You can try “Oatmeal Milk”!

It’s actually not bad! Moistened oats produce a type of milk when soaked overnight in water. You then use a strainer or cheesecloth to squeeze out the milk product from the oats.

Whatever drink you love, be it coffee, tea, cedevita (a dry powder lemon or orange drink) or other, it’s nice to meet new people, and coffee drinking or coffee shop socializing is a great way to slowly integrate into Croatian culture. After all, someone who drinks coffee is somehow a normal person worth knowing.

In Croatian simply say “Jesi za kavu?” (are you for coffee) or “Hoćemo ići na kavu?” (shall we go to coffee) and you will soon feel like a local.