This blog is about you, as much as me! I want to bridge the gap because when I first came to live in Croatia in 1999 I experienced some major culture shock! I honestly felt like a dog, I couldn’t speak or understand anything.

But of course, I eventually caught on.

If you want to save this for later, you can pin it to Pinterest here:


Anyway, people have been asking – why in the world did you leave the “richest country in the world” to come to live in obscure Croatia? and so to save time, I decided to write a blog post about it.

Yes, that’s right!!  It’s time for some basic fun facts about me!!

How this Blog began:

In 2015, at the suggestion of a colleague, I start blogging! He said why don’t you start a blog? What shall I call it? Amerikanka in Croatia. End of story!

Due to life’s demands, I was basically an “accidental blogger”.  Now I have started blogging much more regularly, as my time has freed up a bit more.  This blog is about the expat lifestyle.  As emigrating to the European continent has gained popularity, particularly life in Croatia, I thought I would share my experiences about it.

Maybe I can share you a few misadventures along the way, based on my own experiences with getting to know how things work here.

But you also have to do your part and let me know what you would like to know more about.

When have people been asking me – where are you from originally?  Are you an American or are you Croatian?

Yes, I’m Croatian, and although I have been in Croatia for many years, I came from California.  My hometown is Los Angeles, and I spent 10 (wonderful) years in the San Francisco Bay Area.

In my opinion, SF is a lot like Split!  It shares many similarities – like a very European lifestyle with good public transport. The love of coffee, the arts, newspapers, walking and talking by the sea brings people – the ability to live like a king or queen on very little cash.  There are free concerts, libraries, and museums on designated days of the month.  With a little effort, even the poorest of students can attend art galleries and foreign films.  To sum it up – Simple and elegant.

And now, time for those fun facts about me:

I love my family, they are the greatest: 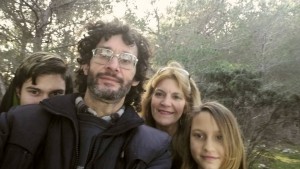 I travel around a lot – for business and for pleasure.

The holidays are upon us!  EEEEEkkkkkk!

I love the lights and scent of pine trees – hate to take them down when all this is over – but the pressure to buy, buy, buy can be almost overwhelming 😀  And now, for a little Croatian  history….(no blood I promise)….

In the olden days (up to about 15-20 years ago), the Christmas tree went up on Christmas Eve, known as Badnjak -(bad -un-yack) when it was decorated (not before!).  Christmas decorations included foil-wrapped pinecones – the foil was saved from chocolate bars.

The traditional Christmas Eve food was Bakalar (bacca-larr) – which is Cod Stew, and Pasrate (pah-sure-aught-tee), a fried donut hole. A large log was put in the fire and people would stay up late singing songs and exchanging presents, which was quite unusual for people who got up at dawn and went to bed at sundown.  Sometimes, people went to Midnight Mass.

The next day, families went to church and there was a big dinner at mid-day. The holidays weren’t officially over until the 6th of January, known as Three Kings, at which point the Christmas tree was taken down.

Hi!  The links in my posts are people who I follow and things that I like, including my own personal recipes and other tidbits.  Consider it an early Christmas present 🙂

After all the Black Friday ads and Cyber Monday deals flooded my mailbox, I received an amazing post by a South African woman named Ann Wilson, also known as the Wealth Chef.  She is big on financial independence, advising people on how to live on their investments and free up their time away from the “exchanging time for money” routine.

She wrote about “Giving Tuesday” – the day after Cyber Monday, and introduced the most amazing project – a water project known as the Spring.

(The video, located in sentence 3 of this paragraph, explains it all).  I am quite impressed by how a former hedonist from NYC got sick of the life he was leading and went to work as a volunteer photo journalist in Africa.  Here it is – right here in video.  To cut to the chase, unhealthy water filled with bugs, germs and diseases is the root cause behind many of the health problems poorer nations face, including parasites and huge facial distortions.  I also applaud Scott that every single dollar of this project goes to the water program itself – not to administrative expenses. Those funds are raised separately.

I follow and subscribe to an amazing financial planner turned blogger, Michelle Schroeder-Gardner who always has great ideas for saving money.  Last week she sent out  a list of Eight Ways for helping others instead of buying often unused presents. To read her suggestions, please click here

DECEMBER – what does it mean in Croatian?

Today is December 1, and in Croatian, it’s called Prosinac. I was a bit shocked to find out that prosi means to beg.  It is a time of begging!  There are plenty of people whose basic needs are not being met, so it’s also a good time to think “what can I do to help”.

Here in Croatia, we don’t have Red Cross.  Caritas is the most common way to donate unused clothing (things your kids won’t wear, old “fat clothes” or things you hate in general).  In most large cities there are large bins to place a large bagful of clothes into.  It’s nice to think of another person getting some kind of benefit from it.

When I lived in Split there is an organization called MOST which means Bridge. They take care of homeless and nearly homeless people.  We also heard about a shelter that appreciated donated meals, so a friend and I made Komiška Pogaća and man, the men ate it right up. Where there is a will – there is a way, so that is what this post is about – the spirit of giving.

Stay well and see you soon!

Disclaimer:  This post contains links to other, related articles as well as affiliate links, which, upon clicking, may or may not provide me with a small commission at no cost to you.