Late summer (anytime after August 15th) is a little like the bottom of the 9th inning.  Everyone knows what the score’s gonna be, it’s just a question of waiting it out.  The smell of autumn is here, with the winds setting in late afternoon.  With this laid back mentality in mind, I decided to take a much anticipated, long-postponed scenic walk.

My daughter takes this path on her way to training when no one is available to give her a ride. I had heard that it was lovely, so now it was time to see for myself. It won’t be the last time, that’s for sure.

We live on dry land, but surrounded by water.  From what I understand about Croatian geography, there are only three cities (towns really) that fit that description, surrounded by water I mean – and they are Vrana, Pakostane and Drage. Nestled between the gorgeous blue Lake Vrana (which means Crow Lake) and the Adriatic sea, they are country towns with lots of rural unruliness – overgrown brush, dry stone walls and country trails.

How to describe the 3.8 km lakeside walk back to Drage? A real treat.

First of all, the road is paved.  I was wearing summer sandals, and no problem whatsoever.  I am itching to buy a bicycle now, it would be faster and more fun. 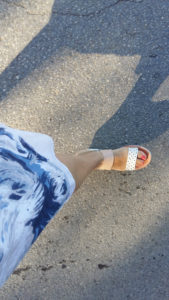 Lots of great sites: views of Lake Vrana, explosive looking clouds, Vrana itself (a small village named after the lake) –  cool and creative forms of habitation, camper homes, storage containers for shipping goods from overseas (from the US?) converted into homes, and funky little shacks, all clean and orderly.  I passed millions of figs – wild blackberries on thorny bushes – and the olive harvest looks promising, too.  An interesting rope fence resembling a sail boat. 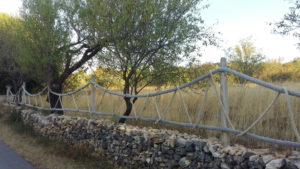 I was surprised and satisfied to see that I wasn’t alone.  Besides being passed by a United Nations variety of license plates – mostly from Western and Middle Europe (every five minutes or so I had to share the road), there were bicyclists, some old, some young, some, like a family of 4 were wearing bike helmets, many others were not.  One old man in a tractor smoking a cigarette and looked at me as if I was breaking the law for picking and eating the wild blackberries.  HA!.  Two older ladies walking and talking and totally enjoying. Some photographers trying to capture the late afternoon hues and perhaps photograph the sunset. A German campground with German – speaking children playing in an olive grove.

Back to the wild blackberries, their real Croatian name is kupina (Ku-pEE-na) growing along the roadside.  They are small (due to lack of rain) and potent! Beware of their thorns – many people use them as a “wall” to protect their property!   I picked only a couple fistfulls, but each piece was a explosion of flavor – sweet and tart combined.  The darker and the riper they are the better.

Once home, I soaked them in dessert wine for a sauce to pour over vanilla ice cream. They make excellent jam too..

There are definitely worse ways of spending a summer afternoon 🙂 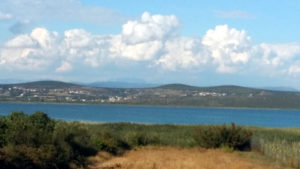 Summer is the busiest season for musicians and tour guides, but somehow we managed to get a day off to get out of town!  Besides celebrating an anniversary, it’s nice to check out other places.

Destination – the ISTRIAN Peninsula in Croatia near the Italian and Slovenian borders.  It was formerly called Histria after the Histrians, a native Illiric tribe that inhabited the area before the Greeks and Romans arrived. Istria is known for its wine, and we were not disappointed 🙂

There are several small, medieval hill towns in Istria – Motovun and Grožnjan are two of them, fortified from invaders with fabulous panoramic views of the surrounding area.  Thanks to recent summer rain showers, the outlying area glistened in different hues of rich green.  It was really wonderful.

Grožnjan (pronounced GROWs-Nyan).  GROŽ means grapes, so grape harvesting was the most likely reason for its name. Nowadays, Grožnjan is a thriving colony of artists – it has a music school with summer drum camp, which we dropped in on, making some new friends 🙂

There are also string  (i.e. violin), piano and other musical workshops, a tartuffi shop with Istrian truffles to sample, but especially art galleries and coffee houses alongide quaint roads and houses.

We ate at a lovely coffee bar which doubles as a restaurant, VERO, which offers delicious and reasonably priced meals with a “to die for” panoramic view of the valley below.  Pizzas range from 38 to 60 kn, and domestic wine was a very reasonable 50 kn per liter.  I also ordered Capresso, a wonderful salad of Rukola (greens) home grown tomatoes and mozzerella cheese.  We ate some Fritula (fried cookies with sugar on top) for dessert.

Here is Rick Steve’s take on the area: Idyllic Istria

How to get there ?  We took the Croatian auto highway up (with a toll road, which came to 125 kn) and the Jadranski Magistral back.  Sleek as it is, the trip up still took 3 hours from Zadar to Rijeka, plus 2 more hours of (breathtaking) winding country roads to our destination.  For the return, the Jadranski Magistral (seaside highway) is free, very windy (so don’t drive on a full stomach) – and also took 3 hours (so call it a tie) but we were travelling in the wee hours of the morning, and presumably, during normal traffic it would have been at least an hour longer.

It’s encouraging to see that the road conditions in Croatia continue to improve exponentially.  The vast majority were in good to excellent condition, with an 8  out of 10 rating for easy to read road-signs and turn-off markings.

Once again , we again realized – Croatia is SO BEAUTIFUL!  We saw majestic mountain ranges and thick forests.  My first thought – is world overpopulation maybe a hoax?  There was nothing but acres and kilometers of beauty in all directions. The journey is another important part of the destination – and when you travel along these roads, it’s was a reminder to me that we are all a part of the grand scheme of things, especially nature.

This theme is a little sad – arson in our beautiful forests.  In the small territory that Croatia consists of – we are home to no less than eight national parks, and among the best known are Plitvica (plit-vit-za) and Krka (as in Captain Kirk-a).  These two are the natural culmination of several rivers flowing to a midpoint, creating waterfalls, cascades of rivers and lakes on a soft limestone bed, surrounded by flora, fauna and wildlife.  I have yet to see any wildlife (Aussies excluded), but rumor has it that they are there, obviously they are afraid of people.

Last week near Pakostane, along the forested highway, one forest fire erupted.  Fires are put out by air, little yellow airplanes called Kanaders.  Water is taken from Lake Vrana in the semi-inland area of Croatia, and the fires are doused from the sky.  However the devastation can occur very quickly.

Sad to say, over the past few days there were two incidents of arson – the first day, one fire – and the second, three burning simultaneously.  This sort of thing really shakes up the whole community.  Rumor has it that arsonists have been apprehended, but I personally think this is more wishful thinking than reality.

What can be done? I am told that there are chemicals out there that can be placed in a forested area and left alone, only to ignite three hours later, giving the perpetrator plenty of time to get away (even cross the border, because Croatia is so small).

In 2007 there were more than 750 fires set, and the drought didn’t help much.  Details in the following link:

It is a problem that with increased tourism, there is not enough ways to control those who want to destroy Croatia’s natural beauty.  Arson here is considered a serious crime, similar to horse thievery in the Old West. 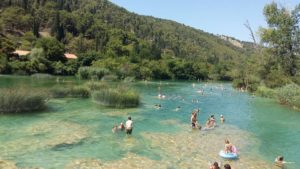 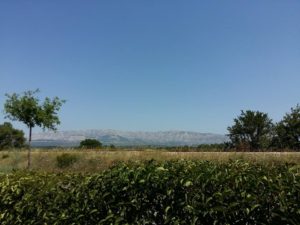 It is nearly the beginning of August, and it sure feels like it.  Last week we were blessed by some summer showers to break the heat spell, and that worked out well with my trip to the south of France.

No I did not lie on the beach in San Tropez but went to a great training seminar near Marseilles.  Regarding the Provencial scenery, I was deeply impressed.  As I told my kids, where we live is #1 but this place is, in my humble opinion #2.

The great classical painter Cezanne based many of his oil paintings on the Provencial landscaping.  I truly felt like I was living inside of one of his paintings.  With Mount Saint Victoire in the background I felt like I might be standing on holy ground.

Back to reality and the superhighway (not a hint of terrorism anywhere), all I could see was that “here is worse than where I live!”.  I picked up a half-dozen items – Haribo candies, Italian amoreto cookies, snacks, headphones and cell phone plug in auto charger (about half price compared to Croatia) but otherwise, there were more cars, more people, more dead grass, and … except for a truly impressive sea and mountain passage near Antibes, France, I’d have to say “so what”!

Ljubljana gave me inspiration, as if I was in the state of Oregon in the USA:. lots of green, bicycles, quite clean, well organized and efficient.  A friendly McDonalds greeted me near the autobus terminal.  I have to say, the Balkans are highly underestimated.  Coming back to Zagreb seemed best of all. “Like Europe exists in all of our imaginations” …small cars due to limited parking opportunities (these cities are old!) with quaint and still fresh pastel three story homes, huge windows with wonderful architectural trims from 100 o more years ago (Sessesionist designs mainly), lots of mature shade trees, fruit on at least half of them, and a real feeling of peace and security as if to say “nothing could ever happen to you here”.  It seems that half the city had in fact left town for the seaside, but nevertheless, thanks to the recent rain, it was fresh and nice, and the normally hot pavement wasn’t so unbearable.

So now I am back home in Zadar and as they say “there is no place like home”.  I feel lucky that I ended up in probably one of the cleanest countries in Western Europe, and hope it somehow stays that way in spite of being peak season, and perhaps the most popular tourist destination in Europe and most of the world.